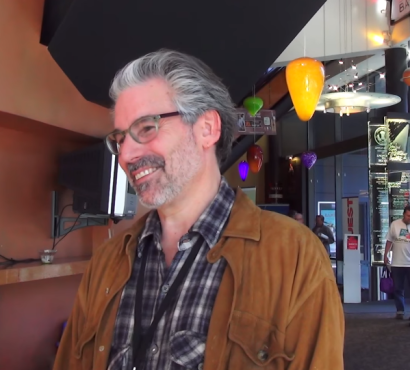 Filmmaker Paul Lazarus’s new documentary “Slingshot” made its global premier at this year’s Cinequest Film Festival.  The film was a clear success with the audience judging from the standing ovation it received. I caught up with Lazarus to find out how and why he made this film and why water? How does Kamen do what he does with that astonishing focus? How doe he keep at it every day of the week? Would you not like to know that? Innovation is a messy business points out Kamen, and yet he is at it everyday. And how does Kamen get to lead his childhood dream? Many of us dream about it, but very few get to lead that childhood dream and Kamen is one of them. You can watch the highlights of the interview with Lazarus, and we have a longer, in-depth interview coming up.

“Slingshot” is an in-depth profile of Dean Kamen and his quest to invent and introduce an economical and efficient water filter system. Water, a fundamental requirement for every human being, is still not easily available to millions of people around the world. Millions of peoples still can’t turn a tap on to get a glass of potable water. They have to travel to a nearby well, pump or spring to get their pot of potable water. Why do people have to travel to get water. How can water be made available in an accessible way is the question that Kamen thought about and came up with a solution. By finding a solution to the water problem you minimize the cause of major diseases in the world points out Kamen in the film.

After years of diligent work Kamen and his team succeeded in creating a water filter that can take any kind of water and turn it into clean, potable water. “Slingshot” traces that difficult and arduous journey of Kamen, a successful and prolific inventor and entrepreneur. Being successful did not easily translate into traction for the product as we discover in the film. He and his team go through many iterations before they they find the right solution. You would think that such a solution would be easy to distribute and install. But, that is not the case. Kamen struggles and eventually ends up teaming up with Coco-Cola, who have a well-established global distribution channel.