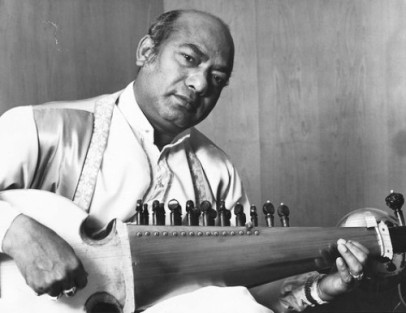 Ustad Ali Akbar Khan (1922 -2009), the legendary sarode maestro was born on April 22, 1922. He would have been 93 years old today. He spent his formative years in the central Indian state of Madhya Pradesh. His father Ustad Allauddin Khan was a court musician and is the founder of the Maihar Gharana of Hindustani classical music.

Khan sahib as he was known gave his first performance as a teenager and went to on establish a name for himself in India. Then in the 1960s he settled down in Marin county in the San Francisco Bay area, which was the epicenter of the counterculture movement. This was the time of  The Grateful Dead, Jefferson Airplane and Janice Joplin. This is where music of a different kind was born that fused different genres, including Indian classical music.  This music went on to influence millions of people. And it was in the San Francisco Bay area that Khan sahib set up his Ali Akbar College of Music and taught thousands of students Hindustani classical music in the guru-shishiya or teacher-student method that is common in Indian classical music.

And here is a video of Khan sahib playing an Alap in Misra Kafi at the University of Washington in 1967.