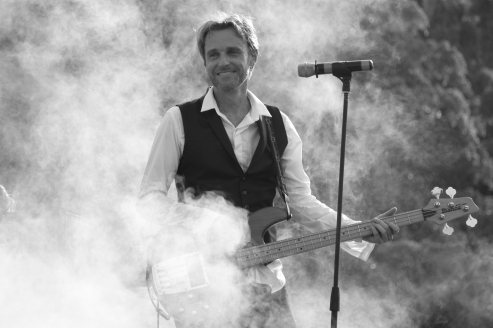 Listen to Mikey McCleary on The Kamla Show

Meet Mikey McCleary, musician, composer and music producer.He has been kept busy creating music for Bollywood films and Indian advertisements, and lately he has branched out to score music for Indian-American filmmaker Shonali Bose’s “Margarita With A Straw”

If his name is unfamiliar, his music must certainly be familiar to most of us. You might have heard his track from “Bombay Velvet” that releases later this year; or, his Tu Hi Tu from “Nautanki Sala.” Perhaps this track from “Shanghai.” or Khoya Khoya Chand from “Shaitan” is a favorite. Then again, you probably would recognize the catchy jingles he put together for Vodafone or Levi’s?

We spoke with McCleary last month on a wide range of topics ranging from his early years in India to his teenage years growing up in New Zealand, the music and bands he listened to, and how he came to compose music for Bollywood films and for Bose’s “”Margarita With A Straw,” his first international film.

McCleary’s musical  taste is eclectic, and this is clearly reflected in the music he is creating in Bollywood. As a teenager he listened to a wide variety of music, his favourites being David Bowie, Dire Straits, Queen, Bob Dylan and Cure.  He enjoyed classical music as well. He studied music and composition in New Zealand before moving to London to work in a recording studio. It was during his stint in London that he helped his former brother-in-law (an Indian)  produce his first album. They ended up working on 3 albums.

About 7 years ago McCleary relocated to Mumbai, the entertainment capital of India and home to Bollywood, the biggest film industry in the world. McCleary first worked in the advertisement industry and produced some memorable jingles. He then got a break making music for Bollywood films.

“India has a way of becoming addictive,” he says. It is not just India that is addictive, but also those vintage classic Hindi film music. His wife Diksha Basu introduced him to Hindi classic songs and he seems to have a special fondness for Geeta Dutt songs.

McCleary is reimagining some of the old Hindi songs in new ways. Often, he introduces a swing element to the the music, and the re-invented songs have found a new audience in India. In fact it is just such a re-worked version of Dutt’s song that is featured in “Bombay Velvet.”

He has produced 3 albums under The Bartender series that pay homage to old Hindi songs; one of the albums is devoted entirely to songs from Amitabh Bachchan’s films. A hallmark of his music is the manner in which he encourages his singers to be inventive with different styles without being tied down to the customery renditions traditional to Bollywood. “I like to encourage my singers to push their voices, to explore different sounds”. For instance he encouraged one his singers to cultivate an ‘Amy Winehouse’s vibe‘ in her voice. Anushka Manchanda, Shalmali Kholgade, Mauli Dave and Rachel Varghese are some of the singers he has worked with to nurture their innovative atistry.

Besides the 3 albums devoted to Hindi classic songs, McCleary produced his first album “TV Dinners” in English. The album features songs from his popular jingles, except he extended them into full fledged numbers. There are 5 music videos that he has made featuring some of the tracks from his new album.

What is next in store for Mikey? He is working on two new projects. He is writing a story for a musical film and working on producing a new album.

And, here is a short playlist of McCleary’s music.