Pixar’s “Inside Out,” is funny, absorbing and packs quite a punch that leaves you thinking. Thinking about what you ask? Why, those little  voices inside our heads that we ignore. You know joy, sadness, anger, disgust and fear?

The film brilliantly captures the various voices of 11 year old Riley Anderson and how they shape her interactions and moods on a daily basis. These various voices are connected to islands of family, friends and personality, which in turn shape Anderson’s longterm memories and her general disposition in life.

Things turn topsy-turvy for 11 year old Anderson when her family moves from Minnesota to San Francisco. Anderson finds herself on an emotional roller coaster ride as she settles down in her new home and new school and tries to make new friends. And, we the viewers, get an opportunity to peek inside Anderson’s head and watch these colorful little personalities try to make sense of her emotional roller coaster ride. And boy, what a vivid and interesting ride it is in 3D inside the world headquarters of these little voices.

Amy Poehler as Joy’s voice is brilliant with her high-energy and happy attitude, while Phyllis Smith steals the show as sadness. I don’t know how Smith did it, but she manages to capture sadness in a memorable way that stays with you long after you have watched the film. Lewis Black does the voice for anger, while Bill Hader is fear and Mindy Kaling is disgust.

Director Pete Docter‘s vivid and clear-eyed portyal of these 5 emotions and how they shape Anderson’s long-term memory is superb. Apparently the story is based on Docter’s daughter and the changes he observed in her when she turned 11 years old. He was puzzled and preoccupied by that change and it sparked off the story for “Inside Out.” I guess the story is an amalgamation of Docter and his daughter since Docter grew up in Minnesota before moving to San Francisco bay area to work at Pixar.

Docter literally shows us what goes on inside your head and why we behave the way we do. The film underscores that joy and sadness go hand-in-hand and that where is joy, there is bound to be sadness too.This is a film with universal appeal that cuts across cultural and age barriers. It is not easy to create a film with such a clear-eyed vision, and Docter succeeds brillianlty in achieveing that vision. 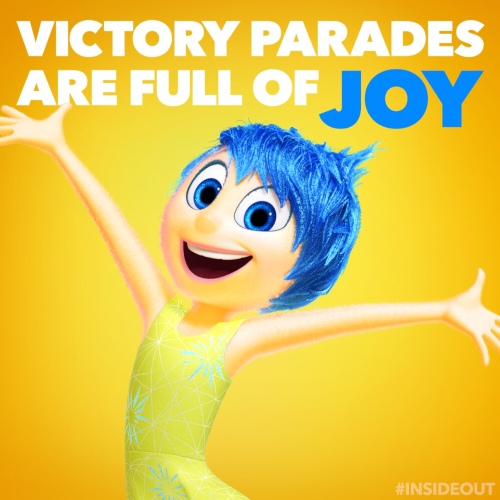