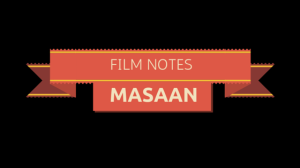 I finally got to watch Neeraj Ghaywan’s directorial debut Masaan, an Indo-French film. The film generated a lot of buzz on my Twitter time line last year. Masaan won two awards at the 2015 Cannes Film Festival. The first was an award from the International Federation of Film Critics (Fipresci), and the second was Prix de l’Avenir award that it it shared with Nahid, an Iranian film.

I was intrigued since Maasan is not a mainstream Bollywood film and yet generated the kind of buzz largely reserved for a good old masala Bollywood film. Though it was hard, I did refrain from reading any reviews or commentary about the film. I wanted to find out for myself what was it about Masaan that got people talking. And boy! did I discover an absorbing film about young people and their desires, love, hopes and struggles in one of the oldest cities in the world – Varanasi or Benares. The film is about what happens when young, educated Indians clash with  traditions and middle-class morality in a conservative town in India. There is none of the loud dialogs and arguments Bollywood is famous far. Instead, what you see are low-key moments about love, exploring sexuality and breaking the caste and class barriers.

There are a couple of reviews I did read after watching the film. The one by Anupama Chopra in The Hindustan Times was spot on – praising the film and pointing out some flaws in the narrative. The second by Deborah Young in the Hollywood Reporter, is more incisive, saying “while the film waves a big flag for personal liberty…The end of the bribery story is morally jaw-dropping.” Truly great reviews both. And worth reading.

Smartphones and Facebook are changing the way young people discover, meet and explore. And yet love in India is not an easy proposition. “India is changing” is something you often hear when you visit India. Yeh hai India or “this is India,” is another common refrain, implying that nothing changes. And that is the conflict you see richly celebrated in Masaan. Go see the film.