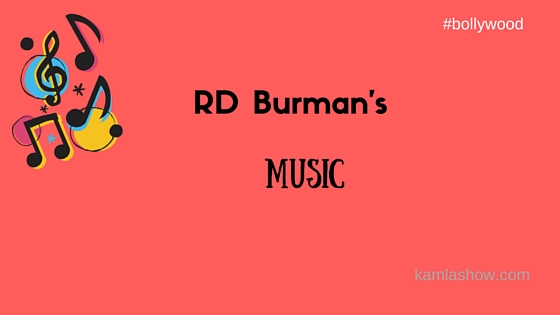 RD & his tight band of musicians introduced new sounds and Latin rhythms into Bollywood films says Prof. Booth. RD’s influence is so strong that you can hear his influence even today. His songs are regularly remixed and released as new tracks.

Here is a short selection of songs from RD’s extensive repertoire of music.

American music influenced RD Burman quite a bit and you can hear that influence in the 1965 Aao Twist Karein from the film Bhoot Bangla. The song was  inspired by Chubby Checker’s Let’s Twist Again. And here is a 2015 remix of Aao Twist Karein.

RD Burman’s hit song O Haseena Zulfaonwali from Teesri Manzil. Listen to the dense percussion rhythm in this track as Prof Booth points out in this interview.

Piya Tu Ab To Aaja from the Caravan is an evergreen favorite.

Dum Maro Dum is one of RD’s best known tracks from the film Hare Rama Hare Krishna. The song is sung by RD’s wife Asha Bhosle. RD shares the backstory of how they created Dum Maro Dum.

Here are a couple of tracks that RD sang. The first is Mehabooba Mehabooba from Sholay.

Here is a second song by RD along with Asha Bhosle called Duniya Mein from the film Apna Desh.

Finally, here is a song from RD and his Latin album called Pantera produced in the United States of America.

Here are a couple of RD Burman playlists from YouTube.