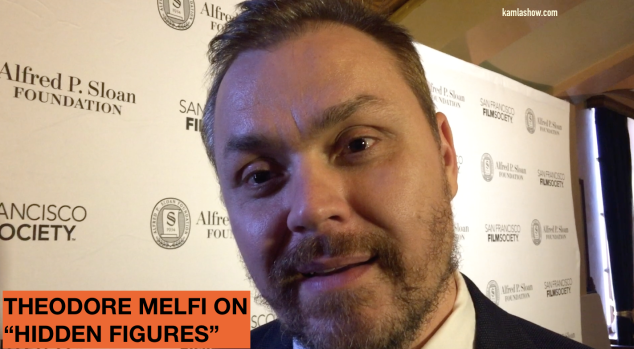 We caught up with Oscar nominee Theodore Melfi of Hidden Figures in San Francisco. Melfi directed and co-wrote the screenplay with Alison Schroder. We talked to him about the making of Hidden Figures, how he got attached to the film. the math boot camp for his actors and the music by Pharrell Williams and Hans Zimmer.The film won 3 Oscar nominations: best picture, best supporting actress and the best adapted screenplay.

Hidden Figures is a true story based by a book by the same name by Margot Lee Shetterley. The film is about 3 African-American math teachers, who worked in NASA’s Apollo project in the 1960s. The film highlights how these women overcame racism and prejudice in the workplace. Interestingly, the stories of these African-Americans and their contribution to NASA has largely remain hidden until now.

In December 2016 Melfi and Olivia Spencer, who acts in the film were in San Francisco to receive The Sloan Science in Cinema award. The award is given by the San Francisco Film Society and The Sloan Foundation.

You can watch our weekly TV show in the US. Here is a list of TV stations in the US that broadcast our show. You can subscribe to our  YouTube channel and podcast where every week we feature new interviews.