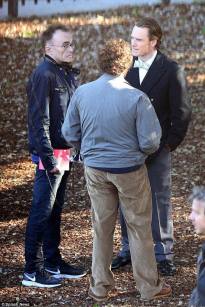 The shooting of the film started in the beginning of the year. The cast and crew has spent time filming in San Francisco and in locations around South bay. The crew spent time in February shooting in and around De Anza College in Cupertino. Jobs’ mother and sister worked at De Anza College at one time if I recollect correctly.

Last year Universal Pictures announced it was producing the film after Sony Pictures withdrew from the project. The film is  based on Walter Isaacson’s book and Aaron Sorkin wrote the screenplay. Michael Fassbender plays Steve Jobs and Seth Rogen the part of Steve Wozniak. The cast includes Kate Winslet, Katherine Waterston, and Jeff Daniels among others.

You can check out the official Facebook page of the Steve Jobs film for updates and photos. The film is expected to release on October 9, 2015.