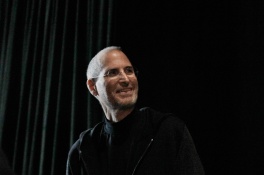 We are obsessed with Steve Jobs. We just can’t seem to get enough of him. There is a new book out about Jobs and two different films about the iconic Silicon Valley entrepreneur. This is not including the 2011 book by Walter Isaacson and the 2013 Hollywood film “Jobs,” with Ashton Kutcher that did not do well at the box-office.

“Jobs” was the book Isaacson wrote with inputs from Jobs himself. The story goes that Jobs reached out to Isaacson to write this authorized biography. Released in 2011 right after Jobs passed away, the book became an instant hit. Folks made a beeline to buy the book, and so did I. This was the book to read to find out the story of Jobs, and his obsession with technology, fonts and his trip to India.

What we have come to learn since the publication of Isaacson’s book is that folks in Apple were not exactly happy with it. Earlier this year Sir Jonathan Ive had this to say in an interview with Ian Parker of the The New  Yorker magazine:

“In a later conversation, Ive said that he’d read only parts of the book, but had seen enough to dislike it, for what he called inaccuracies. “

Apple’s CEO Tim Cook seems to share Ive’s feelings about Isaacson’s book. This is what Cook says in a new book on Jobs, excerpts of which were published in Fortune.

“I thought the Isaacson book did him a tremendous disservice,” says  Cook, speaking out three years later. “It was just a rehash of a bunch of stuff that had already been written, and focused on small parts of his personality.”

So, now there is a new book on Jobs with inputs from key people in Apple and Laurene Powell-Jobs. “Becoming Steve Jobs,” by Rick Tetzeli and  Brent Schlender was released last month. You can read reviews of the book here and here.

Besides this new book there are two new films on Jobs. The first is a film by Academy Award winner Danny Boyle who just wrapped up the shooting of the film in San Francisco bay area. Boyle’s film is due to release by the end of this year. The film stars Michael Fassbender, Seth Rogen, Kate Winselet and others. The film is based on  Isaacson’s biography on Jobs.

Then there is a new documentary by Alex Gibney called “Steve Jobs: The Man In The Machine,” that made its debut at South By South West earlier this year. This film looks at Jobs with a critical eye at his leadership and legacy.

“Steve Jobs: The Man In The Machine,” has created quite a bit of buzz here in San Francisco bay area. It is the opening night film for the 58th San Francisco International Film Festival, where Gibney will be in attendance. This is the film I am looking forward. What new dimensions of Jobs will we discover in this film? Jobs changed our world and how we experience the world in so many different ways. But, how did he do that? Perhaps that is what this film is about. I don’t know. I will find out tomorrow when I watch the film.

And one more thing – if  you want to see every Steve Jobs video there is a YouTube channel for that. Here is a candid interview with Jobs on his legacy from a 1994 interview.